Even pastors need pastors. It should go without saying that someone who loves the Word of the Lord likes hearing a good sermon, as much as giving one. But, I’ve been starting to realize of late, that too many of the sermons preached in the cathedrals are littered with disturbing false doctrine. And one of those that’s been particularly troubling to me the last few months is the false doctrine of the pre-tribulation “Rapture”.

Don’t get me wrong: The Bible clearly defines an event to come which could be described as “rapture”. Although, I really think it’s a silly word. Perhaps more appropriate would be “The Marriage” or “The Unification” or “The Restoration”. The problem is that the Bible tells us it is THE LAST THING, after everything else occurs, including the great tribulation.

You might say, as many preachers do: ‘But we’re not appointed to wrath!’ Let’s look at that oft-misquoted verse in 1 Thessalonians 5:9: “For God hath not appointed us to wrath, but to obtain salvation by our Lord Jesus Christ”. To understand its full context, one should read and understand everything in verses 1–8 up to that point, but ALSO the verse which immediately follows: 1 Thessalonians 5:10 “Who died for us, that, whether we wake or sleep, we should live together with him.” We are not appointed to the wrath of eternal damnation, because Jesus died for us on the Cross. The Lord’s wrath upon our sins is what Paul is referring to when he says we are “not appointed…to wrath”.

Something else in that very Chapter that I find the mainstream ecumenical community often does not focus on: Paul tells us in verse 4 that the coming of the Day of the Lord will NOT come unto faithful believers as a “thief in the night”. 1 Thessalonians 5:4 “But ye, brethren, are not in darkness, that that day should overtake you as a thief.” Paul is explicitly chastising the faithful to NOT participate in the revelry of the world, for whom the Day of the Lord WILL come upon as a “thief in the night.”

Timing is everything, and I said that we should be expecting a “Rapture” (Restoration) as the LAST thing of this old world, prior to the return of Jesus Christ, who will establish his 1000-year Kingdom of Peace on this Earth. The timing of the Rapture is “at the last trump”, as we are clearly told in 1 Corinthians 15:51-52
“Behold, I shew you a mystery; We shall not all sleep, but we shall all be changed, [52] In a moment, in the twinkling of an eye, at the last trump: for the trumpet shall sound, and the dead shall be raised incorruptible, and we shall be changed.” –Can “the LAST Trump” come before the trump that is “last”? In the book of Revelation, there are 7 trumps (significant signs and events of trouble) that are foretold and related to the time of the tribulation. In pre-tribulational doctrine, it is believed that the event described in 1 Thessalonians 5:9 will occur as a brief moment before the tribulation. Essentially, it supposes a second AND third coming of Jesus, which is clearly against everything Jesus and the Gospel teaches. There will be a Second Coming, not a Third.

But again, I ask –just common sense– can an event said to occur at ‘trump #7’ actually occur before ‘trump #1’?

In this morning’s sermon, there isn’t enough time to delve into every aspect of the falsity of the pre-tribulational doctrine, and the great presumptions and twistings of plain Scripture. But, let’s look at what Jesus himself said about the tribulation: Matthew 24:13 “But he that shall endure unto the end, the same shall be saved.” –Can one “endure unto the end”, if they are out of the earth and transfigured into a holy being with God PRIOR TO the beginning of the End Times? –PRIOR TO “trump #1”?

Let’s look what else Jesus says, immediately following that verse: Matthew 24:14 “And this gospel of the kingdom shall be preached in all the world for a witness unto all nations; and then shall the end come.” The Word of the Lord will continue to be preached IN ALL THE WORLD, and THEN SHALL the end come. If all of God’s faithful are removed from the earth before tribulation begins, and only those to be damned are left behind (those we know are going to be carrying about as in the days of Noah), WHO is going to be preaching the gospel of the kingdom to them??

I’ll tell you “who”: It’s going to be YOU. And me. And whoever is willing to “endure unto the end”. Some of us might be martyrs for the Lord, a couple shall be great witnesses doing miraculous signs, as in Revelation 11:3. The witnesses…the martyrs…the preachers will be God’s most faithful. While many shall fall away from the Faith, as is prophesized, may that not be you or me, brethren. Like Job, like Noah, like Moses, like David, like the Apostles, who each endured great hardships and sometimes even death…we are NOT “more special” than them. God has appointed us to do great works of bringing people to Christ’s redemption and His true gospel, even in the coming times of greatest darkness. May you be the greatest light of hope, bathed in the redeeming blood of our mighty Lord and Savior Jesus Christ. Amen. 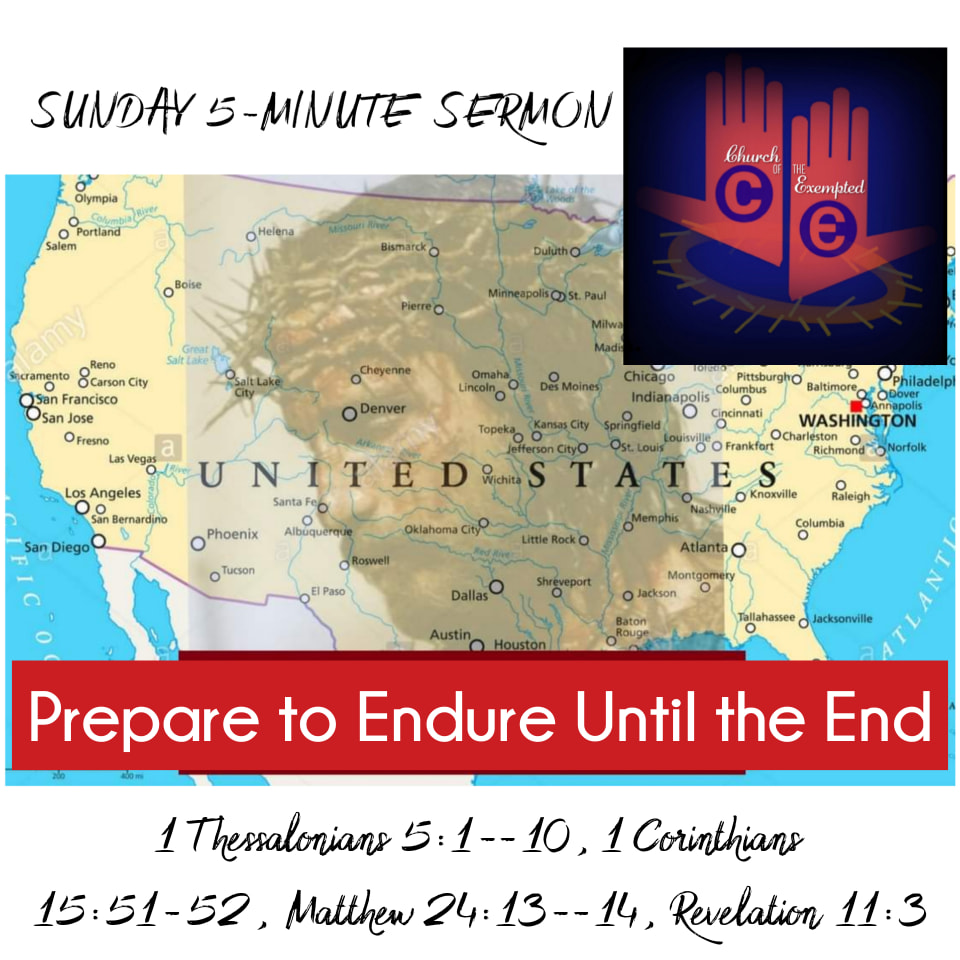