Recently, I’ve seen a passage of Scripture mentioned in multiple sermons, by different pastors and churches as a reason why the miracles of God “ended” with the apostles. Friends, clearly this is a FALSE teaching. It boggles my mind that so many otherwise faithful brethren of the Cloth could so consistently misinterpret this passage. If we read from 1 Corinthians 13:1, down to 13:8, we can clearly gather that the apostle Paul’s message to us is about the persistency of charity. That was his entire message: That charity (a reflection of the great charity that Jesus had for us, by dying on the Cross for our sins) is greater than works. It is esteemed higher than even miracles.

The false teaching that is oft repeated is that in 1 Corinthians 13:8, Paul is somehow saying that the miracles have ceased because he states the “prophecies…shall fail” “tongues…shall cease” and “knowledge…shall vanish away.” Now, to take that thought to the full extent of its ridiculous origin, then Paul must have ALSO been saying we’re going to be perpetually stupid, since knowledge shall vanish away (‘after the apostles’).

Clearly, that’s not what Paul meant or what he was saying. He was telling us that even the greatest works of miracles are nothing in comparison to the gift of love that we have for one another. He addresses this directly in 1 Corinthians 13:2, saying that love mm exceeds even the ability to move mountains. Perhaps, he should have just said, ‘even though I might part the Red Sea, and have not love, I am nothing’. The intent would’ve been the same, but of course the callback to Moses might’ve been a bit too much on-the-nose for the audience of his day to handle.

And, if that common reading of but one short Chapter isn’t enough to convince you that, contrary to what you might have been told from the pulpit, miracles HAVE NOT ceased, let’s look at what Jesus himself said in John 14:12. In this passage of Scripture, Jesus is fielding some questions of doubt from His disciples. He was even asked, for proof, to “show us the Father”. This was even directly after He just said that, “I am the way, the truth, and the life: no man cometh unto the Father but by me.” Instead, he continued in His prior answers to them: that He was God incarnate. But knowing Him, they were indeed knowing God the Father. To expound upon this, in John 14:12–14, He even stated, “Verily, verily, I say unto you, He that believeth on me, the works that I do shall he do also; and greater works than these shall he do; because I go unto my Father. And whatsoever ye shall ask in my name, that will I do, that the Father may be glorified in the Son. If ye shall ask any thing in my name, I will do it.”

GREATER WORKS, my friends. That is what we shall do. And in 1 Corinthians 13:2, I believe that Paul is not being figurative when he compares the power to move mountains to the power of love and charity. He believed it, like second nature, that if it was necessary to do, and the Lord was willing, a mountain could literally be moved by the power of the Holy Spirit living within him, or those he was trying to reach at that time…or even you and me, today.

Make no mistake, this is indeed what Jesus further explained in that same passage we just read from. In John 14:16–18 in a veiled fashion, He talked about His upcoming sacrifice, and that there would be a time when “the world seeth me no more”. But, He would send “another Comforter”, the “Spirit of truth, that he might abide with you forever.”

FOREVER. The Spirit of truth –the Holy Spirit– is with your forever, if you truly believe upon the Lord Jesus Christ, that He died for your sins, and that you are now on a redeemed path of repentance. And you shall do greater works, than even the Son, who healed the sick, made the blind to see, and cast out demons…sometimes without even touching or saying a word. And if it’s necessary, and you have repented honestly and come nearer to the power of the Holy Spirit within you, someday… someday, perhaps, you shall move a physical mountain.

The miracles of God are not ceased. Do not marvel at them, for they cannot exceed in importance the gift that love and charity can bestow upon one another. But never fail to believe in what the Holy Spirit within you can achieve. God bless you, brothers and sisters. In Jesus’ name, amen. 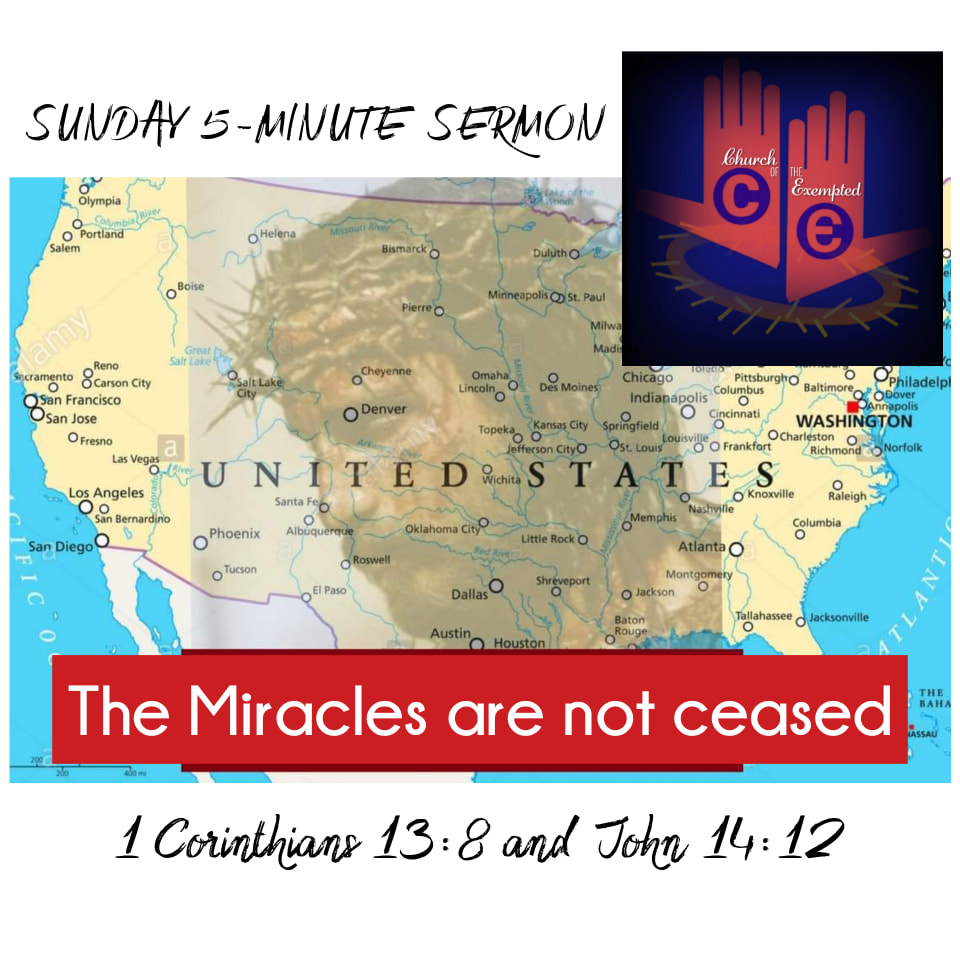